Welcome to our new trustees 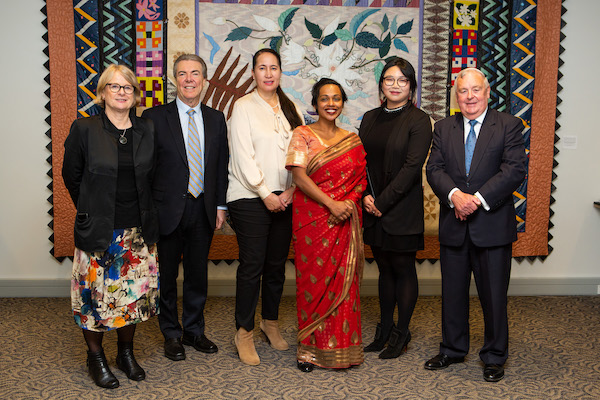 Foundation North trustees and staff welcomed four new trustees with a pōwhiri at their headquarters on 27 May 2019.

Trustee Precious Clark performed the karanga (call) to invite the trustees and their guests into the building, where the Foundation’s kaumātua Kevin Prime, current trustees and staff were waiting to welcome them with waiata and speeches.

Chair of Foundation North, John Slater, gave a warm welcome in te reo Māori to those coming on board: Maxine Shortland, David Whyte, Naisi Chen and Vanushi Walters. The Foundation’s trustees are appointed by Associate Minister of Finance, Hon Dr. David Clark, and joined the organisation’s governing board on 1 June 2019.

“Each of our new trustees brings their own unique perspective to the Foundation, complementing a board which has a genuine commitment to providing quality governance of this perpetual asset for our community,” said Mr Slater. “As well as bringing a rich diversity of business, governance and management skills and experience, we are particularly delighted to see youth represented at our table, as Naisi Chen is just 25 years of age.”

Earlier in the day, a poroporoaki/farewell took place to honour the contributions of the four departing trustees whose terms had come to an end: former Chair Huei Min (Lyn) Lim, former Deputy Chair Alastair Bell, Precious Clark and Toni Millar. The persistence, hard work and genuine passion each had shown for the Foundation’s vision over the years was acknowledged, as was their guidance especially during the development of the Foundation’s G.I.F.T initiative for the Hauraki Gulf, and the organisation’s new 15-year Strategic Plan launched last year.